The upper Weißpriachtal Valley splits into two arms at the foot of the Teufelskirche – Devil’s Church. The right leads to Znachtal Valley and the left takes you to the Ober Hut and Wirpitschsee Lake.
Vibrant larch trees in the autumn sunlight
Autumn tours of the mountains promise an unforgettable display of colour: golden sunshine, blue skies and larch trees resplendent in oranges, yellows and greens. Memorable moments are guaranteed. The
sparkling blue waters of the Wirpitsch and Tiefenbach lakes below the Tauernhöhe, larches and defiant pine trees, along with the crumbling walls of abandoned mountain huts, take the romance of this mountain
setting to even greater heights and turn it into a picture book landscape filled with lasting memories.

The starting point for this walk is the turn off for the Znachtal car park in the upper Weißpriachtal Valley, easily accessible either by car or the valley bus service. The walk leads along a gravel trail past the Grangler Hut (1,320m) until it forks at the „Uln Hut“. Follow the trail to the left behind the hut, where you will pass a roaring waterfall and cross the Longa. After ca. 200 m, there is a marked hiking trail to the left which leads to the serviced Tonimörtl Hut. Once at the hut, walk straight ahead before turning right at Wirpitschsee Lake (1,699 m). After an ascent of around 150 metres along an unmarked, but well trodden trail, you will reach the Tiefenbachsee Lake at 1,846 metres above sea level. 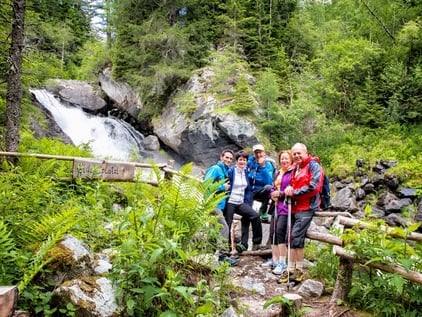 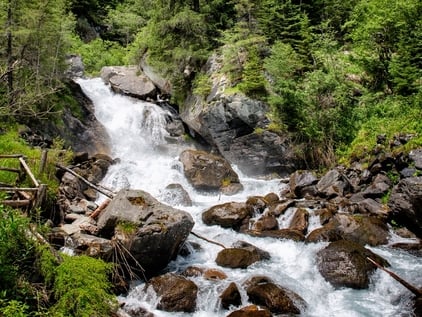 Before the fork in the trail is reached, you will meet a very tight and steep section: the
Lahntörl. An area that used to be severely threatened by avalanches and rock fall and has always been considered to be rather creepy. The lower Frimlalm is not far from here and on the way you will see a rock where, with a little imagination, you can recognize the outline of some claws and a face.

The following event is said to have occurred here: It was Christmas Eve and a farmhand from the Frimlbauer Farm was making a long trek out to an alpine hut, in order to fetch back the lid of a butter churn that
had been forgotten. In local dialect, the object is known as a Riakiwebai. In midwinter, especially, a solitary traveller must always expect strange encounters, for these nights are, after all, the domain of demons and spirits. The lad believed none of this. However, he did begin to get a few butterflies in his stomach as he heard a strange call coming from a rocky mountainside: Attack, attack, don’t you see the red-haired man? Equally uncanny came the response: I can’t get to him, he is led by that four-legged biter! Now the lad did indeed have his brave dog, Vieräugl, at his side. When he tied him to the fence of the hut in order to retrieve the Riakiwebai from within, the poor animal began to whimper quite pitifully. When he returned from the hut, he couldn’t have been more taken aback, for standing there before him were two tethered dogs, identical in every way. One of the animals seemed like a kind creature to him, with its tail wagging back and forth, so the farmhand went ahead and released him. But that was the wrong decision. Next to a boulder appeared a black dwarf, who placed his cold, clawed hand on the lad’s shoulder and whispered: Whatsoever this day delivers to me, shall belong to me for all eternity! Thus began a struggle for life and death, and the boy would certainly have been lost if it were not for the fact that his brave companion, Vieräugl, had torn himself loose in order to aid his master. Suddenly, the black dwarf disappeared like a ghost in the night. But how thoroughly did this night change the young man! The next morning, when he stepped into the farmhouse at the Frimlbauer Farm, the young farmhand had been transformed into an old man with grey hair. 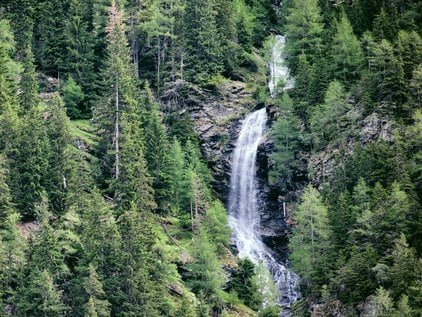 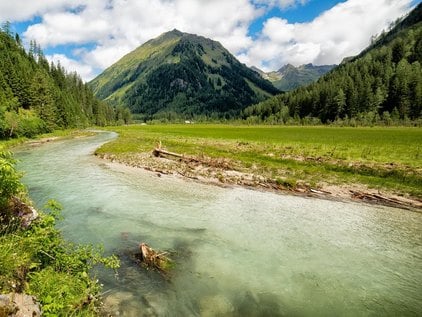